Among duplex stainless steels, the lean duplex family is a quite new family, still in expansion. It allows a good
corrosion resistance, most of the time over that of a standard 4301 austenitic grade, to high mechanical
properties, far higher than that of a 4301, and to a low amount of expensive alloying elements such as nickel
compared to that of a 4301.
But when these grades are produced in high diameter bars, they often present a bad toughness and a poor
machinability, these properties being critical when trying to use such high diameter bars in various
applications. For example, the well-known 4062 and 4162 grades present an impact strength below 100 J at
20°C and below 50 J at - 46°C on ?73mm bars. Moreover, their machinability in terms of tool wear and chip
breakability is below that of 4301 grades, especially when these last ones are of an improved machinability
version, such as UGIMA®. The poor machinability of these lean duplex grades is mainly due to their high
mechanical properties which induce high cutting forces on the tools during a machining operation, thus, rapid
tool wear, and is also due to their very low sulphur content (less than 10ppm) which does not help the chip
breaking contrarily to what happens on a 4301 grade with 0,025%S.
It is the reason why UGITECH developed these last few years the 1.4669, a new lean duplex grade with a lower
nitrogen content and a higher copper content in order to improve the toughness of this kind of grades and to
lower the tool wear rates when machining them via a decrease of the cutting forces on the tools. Moreover, a
control of the inclusions in the grade was performed in order to improve the chip breakability of the grade
when machined. Of course, this new grade keeps a corrosion resistance over that of a standard 4301.
INTRODUCTION
Among duplex stainless steel, the lean duplex family is a quite
new family, still in expansion. Themost known are the 1.4062 and
the 1.4162 Lean Duplex Stainless Steels (LDSS). Compared to the
1.4362, these new LDSS have a lower amount of expensive alloying
elements such as nickel (between 1,5 and 3% compared to
the 4,5% of the 1.4362). To keep a good ratio between ferrite and
austenite (not so far from 50/50) in these two LDSS, their N was
raised from around 0,12% to 0,2% and, in 1.4162, chromium was
slightly decreased (from 22-23% for 1.4362 to 21% for 1.4162).
The consequences of these chemical analysismodification aremultiple
as detailed in paragraphs 1 to 3: loss in toughness, in machinability
(in terms of tool wear rates), and in some cases in corrosion
resistance compared to the standard 1.4362. So the question
is: how can we improve the machinability and toughness
of a LDSS, without too expensive alloying elements and keep, at
the same time, a corrosion resistance equal of over that of a 1.4301
austenitic SS?
TOUGHNESS OF 1.4062 AND 1.4162 LDSS
Different ? 73mm bars of 1.4062, 1.4162 and 1.4362 were industrially
produced in order to compare their toughness, corro-
Nicolas Renaudot, Eric Chauveau, Marc Mantel
UGITECH research centre, France
Paper presented at the 7th European Stainless Steel Conference -
Como, 21-23 September 2011
sion resistance and machinability. The chemical analysis 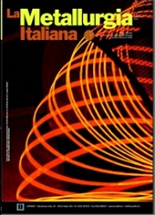