Moving mould for the future… Due to mechanical reasons, conventional lubricated oscillating moulds limit
the casting velocity. If the friction in the mould grows too strongly, the thin strand shell can tear, in a worst
case followed by a breakout. However these constraints are not applicable to moving moulds.
RTSC (Rapid Thick Strip Casting) is an innovative concept for the production of hot strip. The particular
innovation of the mechanism consists in replacing the stationary oscillating mould with a mould performing
a caterpillar motion. A new mould design is able to eliminate former failures and problems. The key factor in
the new design consists of a parallelogram-shaped strand cross section. Straight below the caterpillar-mould, a
shaping machine is placed with a secondary cooling zone. This is where the conventional rectangular shape is
formed by inline-shaping with liquid core.
RTSC is a new technology offering the option of high productivity. Studies indicate that a casting speed in
a range of 20 to 30 m/min at a final as-cast cross section of e.g. 20 mm x 1600 mm is possible. The strand
width is easily adjustable and the final product only requires low metal forming degrees in comparison to
conventional slabs. 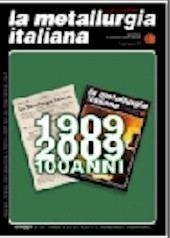