Loss of coherency at interphase ?/? boundary in Ti-6Al-4V alloys during deformation at 800°C

Ti-6Al-4V is one of the major titanium-based alloy especially for creep purposes. The alloy is generally
subjected to high temperature deformation and it is generally used at warm/high temperatures. The alloy
(?+???)-transus temperature is 995°C, that is, for temperatures within 995°C a mixed ?+? phases
microstructure characterizes the alloy mechanical behavior. The mutual relationship between the two phases,
?????HCP and?????BBC, is such to have: {0001}? || {110}? ; {11-20}? || {111}?, which in literature are known as
Burgers orientation relationship. The coherency of the two phases is controlled by this crystallographic mutual
relationship. Phases semi-coherency and non-coherency come from a non parallelism between the two
boundary crystallographic planes. The present work focuses on the microstructure evolution of the ?HCP/?BBC
interface coherency character with hot compression at 800°C and a strain rate of 10-3s-1 to an average true
strain of ? = 0.29 and 0.69. Loss of coherency was determined to occur at a strain ? = 0.40. The present study
was carried out by TEM inspections and SAEDP analyses. 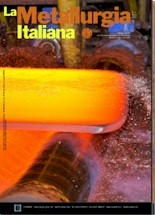