In this work, the contact stresses and temperatures during hot and cold rolling have been measured. A work roll
containing three different sensors was used for the measurements. There were two contact devices for directly
measuring forces and one temperature sensor. One sensor was the “ROLLSURF” sensor. Results obtained with
this sensor have been presented earlier [1-3]. The measurement principle is based on deformation measurements
with strain gauges which were placed on an internal cradle-type roll insert. The second sensor was a friction pin
sensor. The forces on the top of the pin were measured by three axis piezoelectric-transducers. The pin sensor
was mounted inside the work roll opposite to the ROLLSURF sensor. The third sensor was a thermocouple placed
next to the pin sensor. The temperatures were measured very close to the roll surface. The surface boundary
conditions including the heat flux and surface temperatures were computed using inverse modelling calculations
developed at Brno University of Technology.
The main task of this paper is to show a comparison of the contact forces and contact length measured with the
strain-gauge sensor and the pin-sensor. 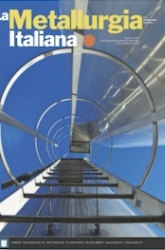