The paper is oriented to the study of chlorides corrosion of carbon steel in simulating alkaline concrete pore solutions.
Cyclic voltammetries (CV) were performed in order to evaluate the influence of pH, in the range of 12.6-13.8, on the
inhibiting properties of nitrite and anions of two organic acid, lactate and aspartate, on localized corrosion initiation.
The results confirm that the corrosion resistance of steel in solutions with the same pH of concrete is strictly dependent
upon the chlorides-alkalinity ratio (Figures 6, 7). The inhibitors showed an additive contribute to alkalinity with
different weight for the three substances considered during testing.
The CV tests were performed in aerated solutions at room temperature on disk specimens machined from a carbon
steel bar, with an exposed surface of 0.67 cm2. Disk electrode (RDE) rotating at 2500 rpm was employed for reducing
the effect of diffusion. The test was performed after conditioning of the working electrode at -1 V vs SCE for 60 s, reequilibration
for 15 s and two polarization cycles between -1.7 and + 1 V vs SCE at 50 mV / s scan rate.
Before test, the specimen was passivated in the test solution for 72 hours to grant the formation of a stable protective
layer on the steel surface without chloride addition. The inhibitors were added into the passivation solution before
the immersion of specimen, at different concentrations, 0.01, 0.1 and 1 M for sodium nitrite, 1 M for sodium lactate
and 0.1 M for sodium aspartate. Two characteristic potentials related to pitting initiation susceptibility, E1,1st and E1,2nd,
were derived by the first and the second CV cycle, respectively (Figures 1, 3, 4, 5). The results confirm that the critical
threshold for localized corrosion initiation can be expressed as a function of a critical [Cl-] / [OH-] ratio; the probability
of pitting initiation is low in the case of [Cl-] / [OH-] ratio lower than 0.6 (eqs. 1-4). The nitrite addition causes an
increment in the critical [Cl-] / [OH-] ratio (Figure 8-10) that can be quantified by introducing an efficiency parameter
f* (eq. 9; Figure 13). This parameter defines the effectiveness of the inhibitor compared to alkalinity. It is about one
for nitrite ions. Thus, nitrite ions show an inhibition of corrosion initiation similar to that of hydroxyl ions. For aspartate
ions (Figure 11), f* depends upon pH (Figures 14, 15); above 12.6, the higher the pH, the higher the f* was noticed. At
pH equal to 13.8, the aspartate showed a f* value higher than nitrites at the same concentration.
Sodium lactate showed an almost nil f* parameter, denoting a negligible inhibition on pit initiation (Figure 12). Thus,
the positive effect observed during previous long-term tests on concrete specimens should be ascribed to an effect on
the propagation phase rather than initiation of the localized corrosion. 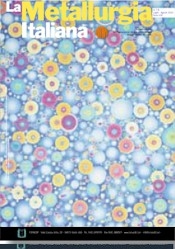