The Deep Cryogenic Treatment (DCT) is known to have
beneficial effects on mechanical behavior/properties of
some alloys. It was also reported to be beneficial for the
creep strength of Mg alloys. The present study is aimed
at checking the effect of DCT on the high temperature
behaviour of the Mg alloy AZ91 by means of comparative
creep tests at 100 and 200°C carried out on high pressure
die-cast specimens. In addition, the role played by initial
microstructure was investigated by comparative creep
tests on annealed and solution treated specimens. The
mechanical tests were joined to optical and scanning
electron microscopy observations on the creep specimens
prior and after their high temperature exposure and to
Differential Scanning Calorimetry analyses to investigate
the thermal stability and the microstructural evolution of
the alloy. The investigations results demonstrated that the
effect of initial microstructure is by far more important for
the creep properties of the Az91 alloy than the cryogenic
treatment. DSC analyses revealed to be a useful tool to
get information on the microstructural stability in view of
the development of microstructure-based creep models 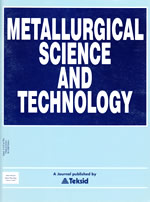